Shenseea didn’t hide her comment creeping on Dexta Daps Instagram page, while some fans injecting Romeich into the mix.

Dancehall artiste Dexta Daps is arguably one of the most-loved deejays to have come out of Jamaica. Females adore him, and men simply want to be him for even one night. On Sunday night, the “7-11 “singjay was in Florida for an All White event, and as is his signature style, he had the females in a tizzy with his tantalizing performance.

On Monday, Dexta Daps shared a short moment from the event when he was dancing with dancehall artiste Jodi Couture. The two entertainers seemed to be mimicking lovers in the “throes of ecstasy while on stage. “He captioned the post with a naughty emoji as well as a flurry of laughing emojis, along with his commentary. “ABT LAST NIGHT VFS ALL WHITE – Watch him face Tu….SOMEBODY TAG JODY COUTURE.”

The Instagram post immediately started attracting a ton load of comments from Dexta’s adoring fans. One comment that stood out among the sea of thirsty females was one made by “Rebel” deejay Shenseea. The comment left a few people puzzled while others laughed while co-signing what she had written. With tracks such as “Tie Me Up,” it’s hard not to conclude that the mom of one knows her way around the bedroom. No wonder she was able to comment on Dexta’s gyrating and waistline actions with such clarity and conviction. 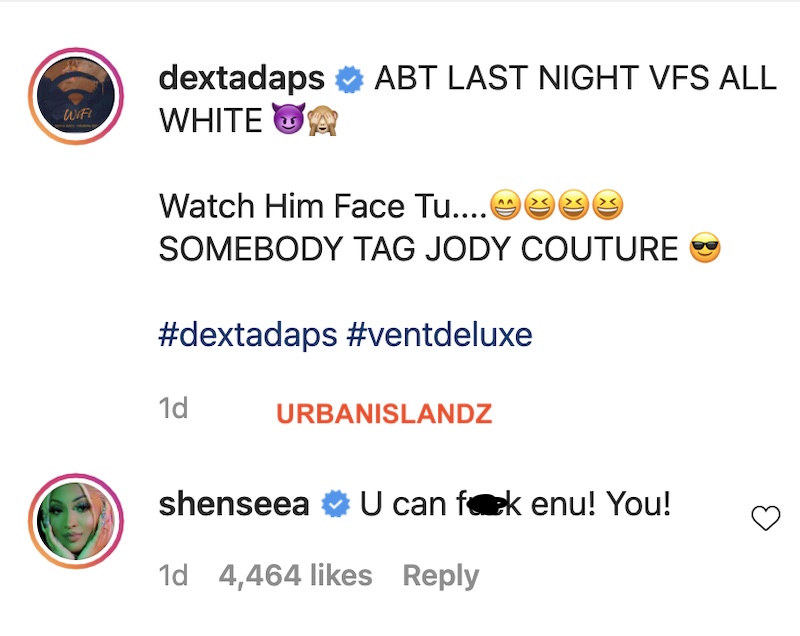 This, of course, caused a few raised eyebrows, but things were not over just yet as the “Owner” singer provided his response. Dexta Daps wrote in comical disbelief, “@shensea u 2.”

Fans were now left to speculate and form their own opinions on the matter, with a few wondering if both were trying to announce a possible romantic union between them. All in all, it seems to all have been done in good fun, and Shen was simply caught up on Dexta’s magical web.

Some fans mentioned Romeich in the comments and perhaps prompted Shenseea to delete the comment in not wanting to start any rumors. The dancehall baddie and her manager have been rumored to be dating, but neither of them has ever confirmed those speculations.

Still, that didn’t do much to cool the rumors and the obvious chemistry between them when they’re together.